Updated [Apex Legends NoRecoil Script] – PART 2
So the OP from previous threads with this script was banned, and since I was the one who was updating the script I decided to move the discussion to this thread, so I can release updates. 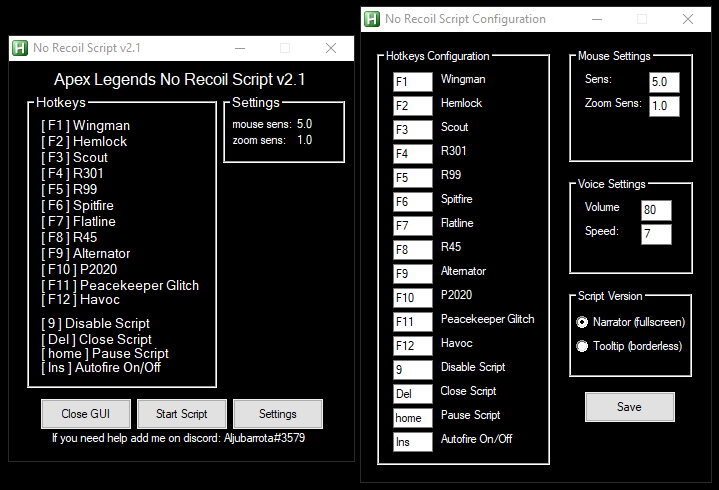 Narrator Version:
– This version has a tiny man included in the code, he will talk to you anytime you select a new weapon or cycle between them.
You can set his voice speed and volume on “settings.ini” or by using the included GUI.
– Works in fullscreen
– This is the default selected script.
Known Issues:
– It will sometimes double-speak the name of the weapon. This doesn’t have any effect on script functionality. Will fix it later.
– Rarely the script will not stop firing, press LMB to stop it.
Tooltip Version:
– This version shows a little on-screen box with the name of the weapon you selected.
– Only works on borderless.
NOTES:
– Now there’s only one script, you can still chose between Narrator or Tooltip by going to Settings.
– If you don’t use default in-game mouse sensitivity configure it on Settings.
– If you don’t use default game keybinds configure them on Settings.
– The script can still be used without the GUI, all configs are now in setttings.ini. You can manually edit it.

AHK Hider is recommended to hide ahk scripts, I believe it was made by tgottie.
It’s already included in the folder.

Some anti-virus might delete ahk hider dll files.
Your final folder should look like the one below.

HOW TO:
If you use GUI:
1. Run gui.ahk.
2. Press Start.
3. Press the 1 or 2 to select a weapon slot. Press the F# key configured for that weapon.
4. Play.
If you don’t use GUI:
1. Run no-recoil script.
2. Run ahkhider.ahk
4. Press the 1 or 2 to select a weapon slot. Press the F# key configured for that weapon.
5. Play.
You can have two recoils set, one for each weapon.
Latest Changes – 17/05/2019
— Added a way to switch the recoil pattern using the mousewheel.
— Removed Auto-Fire.
— Replaced Wingman with Prowler. (only hop-up pattern for now, thanks to golfhjhj)
— Updated the following recoils: R301, R99, Devotion. (thanks to golfhjhj)
Previous changes:
— Added Havoc Turbocharger. (To enable Turbocharger double press your Havoc F# key quickly.)
— Added recoil for Hemlok single fire. (To enable Hemlok single fire double press your Hemlok F# key quickly.)
— Added recoil for Devotion.
— Fixed an error on Havoc selection.
— Fixed the issue brought by last update where you had to press multiple times to select a weapon.
— Updated Havoc recoil pattern. (thanks to MoDPOwer)
— Fixed Pause.
— Added Havoc. (still needs work, but I have limited time now.)
— Fixed an issue where an unassigned weapon slot would assume the same recoil as the other slot.
— Fixed a bug in auto-fire code.
— Reworked holster/grenade key so it only stops the recoil control and not the entire script. (You still have to press 1/2 to get the recoil back)
— Added Pause Key, default is “INS”.
— Reduced CPU usage drastically. (thanks to harahara)
— Replaced R99 recoil pattern. (thanks to harahara)
— Several changes to code, hope it’s faster.
— Script now will try to run as Admin by default. (fixes issues for some people)
— Removed DPI option from GUI.
— Added asynchronous speech to Narrator. Voice shouldn’t halt the script anymore.
— Fixed some code errors.
— Added GUI.
— Settings/Hotkeys are now saved in settings.ini.
— There is only one script now, you can still chose to use Narrator or Tooltip through Settings.
— Fixed some code errors on peacekeeper glitch.
— Fixed some general code errors.
— Changed auto-fire keybind to “Home” instead of “N”.
— Reworked Peacekeeper glitch
— Made some code changes on voices function, should be quicker now when cycling between weapons(narrator).
— Script now pauses when you open inventory
— Script wont work if you are on the desktop
— Peacekeeper glitch reworked
— Fixed Problem where script closed itself
— Script now pauses when you equip grenades
— Script now pauses when you holster weapons